The History of the Manor house Groß Markow

Enjoy your holiday at the castle & experience history first hand

The old and venerable manor house Groß Markow is situated on the edge of “Mecklenburg Switzerland”, not far from Lake Kummerow. A beautiful landscape – hilly, covered with forests and fields – is located in the surroundings of our small “castle”, which is ideal for family holidays, group trips, weddings or business events.

The small village Groß Markow is located about 13 km northeast of Teterow on the road to Neukalen. South of the village, the Peene River flows towards Lake Kummerow.

Southeast of Groß Markow, in the direction of Peene lie the remains of a tower hill castle. This hill with its 4 oaks can be seen from far away. This castle was probably also the residence of the princely bailiff Arnold Levetzow.

The actual manor village was later built at its present location. Some still existing half-timbered houses date from the 19th century and have been lovingly restored. The manor house was also built in 1829 as a simple plaster building in the style of classicism.

The von Levitzow family remained in the possession of Groß Markow until 1945. After the Second World War the former manor house served as refugee accommodation, branch of the Teterow hospital and from 1965 until the fall of the Berlin Wall as a nursing home.

Renovated with loving attention to detail and at great expense, the manor house is now available to national and international guests. Find out more about the wonderful equipment of the manor house here! 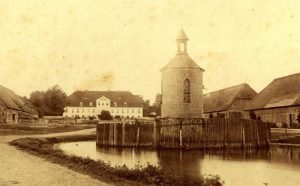 To the reservation of the manor house!

Goethe was in the circle of the mother of Ulrike von Levetzow, the daughter of the owner of Groß Markow, in the glamorous Marienbad. There he met Ulrike. Despite being 72 years old, he immediately fell in love with the 17-year-old lady and then, when she was 18 years old, proposed marriage to her.
Still in the summer of 1823 he writes to Ulrike:

“If one criticizes that we love each other, we must not deceive ourselves. Reprimand is of no strength; it may apply to other things. No failure, no scolding, makes love reprehensible.”

The marriage proposal that Goethe had Grand Duke Carl August von Weimar make to her in the summer of 1823 was at first seen by her as a joke, although Carl August generously cushioned it by offering him a high widow’s pension of 10,000 Taler a year. Amalie von Levetzow advised her daughter in this unusual and delicate situation maternally wisely without paternalism and recommended careful consideration. Ulrike, however, “still had no desire to get married” and found that she did not need time to think about it. She loved Goethe like a father, but he was cared for by his son August and his wife Ottilie in Weimar and therefore did not need her. As unbiased as she was with Goethe, as unbiased as she was in rejecting his application, she remained unmarried.

Goethe’s courtship of Ulrike’s hand became one of the great social affairs of his time. Posterity owes his feelings for Ulrike to the “Marienbader Elegie,” a shocking testimony to his pain at the loss of Ulrike. 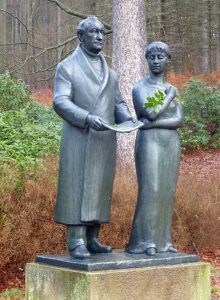 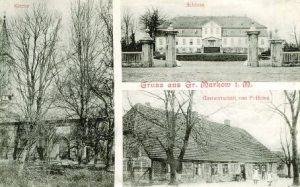 Equipment of the Manor house